Standing at the top of the Grand Canyon, we peered over the rim. “That’s the Colorado River,” said Kev. “We’re hiking down there tomorrow.” The sun set 20 minutes before, and the canyon was shrouded in a dark blue haze. It was 40 degrees and Kyle was still damp from our swim at Slide Rock Park. The depth of the canyon was difficult to perceive from our vantage point, 5,000 feet above the floor. We’d learn first-hand in the morning. 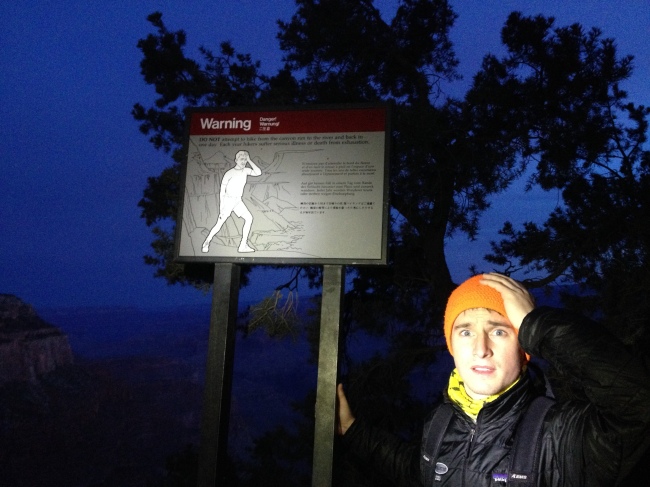 The warnings are valid. The bottom of the canyon can reach well over 100 degrees Fahrenheit, and the top is at an elevation of 7,000 feet where the oxygen is much thinner than sea-level coast dwellers are used to.

But, we all have the adventure gene in us.

At 5:20 AM, we began our descent down South Kaibob with headlamps on, illuminating the dusty path in front of us. Spirits were high as we sauntered down the first mile, taking photographs along the way. Sharp corners and steep drops halted my excitement, and acrophobic waves swept over me. I’d round the corner and the tides of fear would go out, and the ecstasy rolled back in.

In most sections, the trail is about 7 feet wide. It’s enough space for a fully-packed mule to pass a broad-shouldered man or wide-hipped woman, but not much more.

The sun rose at 5:54 AM. A couple sat on the edge of the trail and watched as the canyon turned from blue-grey to orange, then copper. 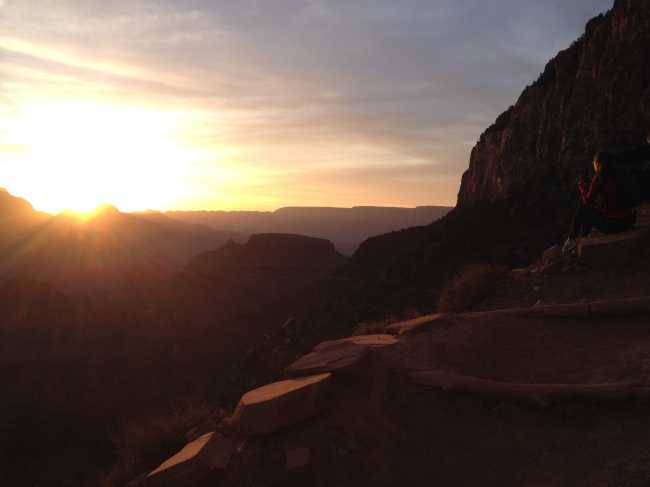 We could not have asked for a more perfect day. Temperatures never rose above 85, and a cloud ceiling protected us from the direct sun through the course of the entire day.

The hike down South Kaibob was 7.4 miles. Every mile was a new landscape. One mile we left Arizona and ended up on Mars.

Another, we traversed what could have been the Moon. Paths evolved from dirt steps, to stone, to red dust and to fine sand. Temperatures climbed as we descended. Vegetation, rock formations, and colors were in constant flux.

Despite all of the time we spent taking pictures and admiring the landscape, we reached the surprisingly green Colorado River just after 9:00 AM.

Kyle took a life-altering reprieve in the bathroom, Kev scouted out a trail toward the northern rim, and I found a picnic table for us to take a snack break. We gobbled down fruit, meal replacement bars, and handfuls of nuts and hemp seeds, as a squirrel sat patiently, waiting for scraps to scavenge.

We began ascending the Bright Angel trail, a 9.5 mile hike back up to the South Rim. Walking along the Colorado, we waved to a group of white water rafters who were about at the halfway point of their 16-day float. They were to our right, about 60 feet below.

We approached a narrow pass. A man traveling alone was heading in the opposite direction, straight toward us. I began to slow, so we didn’t have to simultaneously cross the approaching four foot wide path. Instead of continuing straight along his course, he jumped onto a stone wall, no wider than a balance beam, marking the edge of the cliff. A fall would kill him.

He didn’t slow, nor blink, just kept on walking . As he hopped off the wall, back on the path, he lost footing in the gravel. He leaned forward and caught himself with his left leg. Unphased, he kept walking. “His life just flashed before my eyes,” I told Kev.

After the near-death meander along the river and an underwhelming cave exploration, we ascended our first switchback of the day. We were able to catch our breath quickly as there were more flats to cross before hitting Indian Garden.

We thought we had seen it all – Mars red hillsides, Cape Cod sands, the Moon, a Grand Canyon sunrise. But Indian Garden was another new landscape in our ever shifting journey. A stream cuts through the arid terrain and feeds a narrow, lush forest. The scent of flowers was kept afloat in the slightly more humid air.

We filled our water vessels in Indian Garden and began the last leg of the journey, 3,000 vertical feet over the course of four miles. Kyle, with empty bowels and a sudden caffeine kick led the charge. We began the final ascent at a good clip, taking frequent but quick water and snack breaks.

Kevin, after accidentally breaking his jar of peanut butter the night before the trip, was running on fumes from a lack of protein. His dietary restrictions limited him to fruit and seeds for the day. Like a terribly inefficient SUV, he had to pull over and refuel every few hundred vertical feet.

Eventually, we rounded a corner and we could see the top. Our eyes straight ahead, we tried our best not to push any of the hundreds of tourists off the increasingly congested trail as we marched to the top. I grabbed the first person I came across and asked her to take our photo. 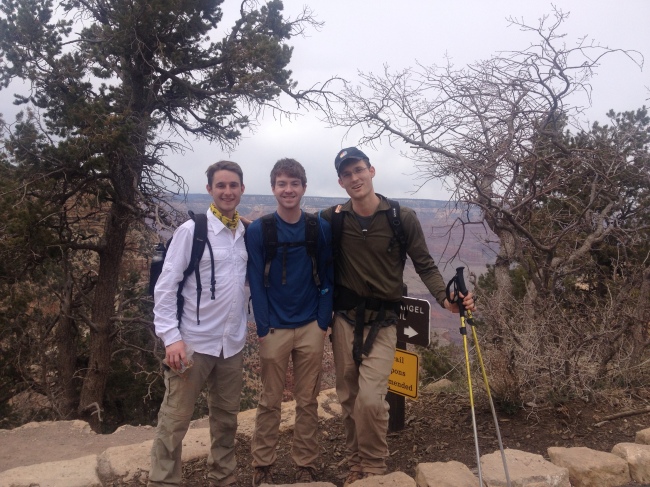 High energy and good spirits at the top

Our bodies sore, but our minds refreshed, we drove back to Phoenix the next day. We talked about hiking the Berkshires, Mt. Washington, John Muir Way, Joshua Tree National Park. Conversation led to weddings, work, wives, fiancees, budgets, vacation hours.  No more trips this year, hopefully next though.

2 thoughts on “Down and Up Again: A Grand Canyon Story”